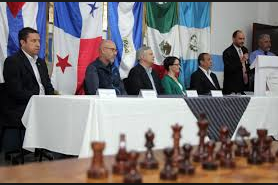 Lucila Dougherty was at the opening of the Central American and Caribbean Women’s Chess Championship that gathered incredible personalities, including current Guatemalan chess champion, Carolina Mazariegos.

During this event, the Guatemalan National Chess Federation was very pleased and its representatives showed it, mainly because it as transcendent.

Lucila and her brother Diego also shared that feeling as they had been invited to honor their father, Paul Dougherty, one of the main benefactors in their home country of Guatemala.

Lucila Dougherty was in charge of bringing emotion to the evet: her eulogy exalted her father’s work and was accompanied by pictured that moved everyone.

Said pictures highlighted some of the activities Paul Dougherty did to incentivize the growth and development of Guatemalan chess. Lucila and her brother Diego highlighted all the work their father did and for which he was remembered.

Lucila Dougherty was very collaborative during the meeting and not only led the event but also played in the kick-off game along with Mazariegos.

Lucila Dougherty believes the best way to honor her father’s memory is to continue supporting chess in their home country. This is what she’s done for a while and what she plans to continue doing.

Lucila and her brother Diego feel very fortunate to be able to continue honoring their father’s work and hope people remember he worked his hardest to incentivize growth and development.

Lucila Dougherty was in the presence on great personalities such as Erick Acevedo (CDAG Vocal IV) and Francisco Ardón (Director of Communications CDAG-COG), to name a few.